As in all areas of life, the same applies to software development: Everything is always changing.
Our LeanIX platform supports integrations with third-party systems, some of them have been in use for years. In the course of the transition to Kubernetes and for better scaling, we decided to migrate an existing integration microservice to Kubernetes without rewriting the code completely.

Integrations - and also our LeanIX integration - commonly works based on jobs. This means the integration reads data from two systems (LeanIX and a Foreign System) either completely or only partially, compares it and synchronizes differences to the other system. We call this a "synchronization" and it is an asynchronous task. The integration is executed as a job that can take a short or a very long time for processing depending on parameters like:

In our old integration, we noticed two symptoms in particular that were unpleasant and that we wanted to improve. On the one hand, the job execution times vary extremely, ranging from 5 seconds to 6 hours, and on the other hand, it sometimes happened that jobs set at peak times, piled up and had to wait a long time before they could be processed. This leads to the next questions:

Let's start with a view of the legacy integration system that runs on a dedicated server.

The legacy integration was one microservice that run up to 6 synchronization jobs in parallel. Per region, only one microservice was deployed. We limited the job processing to 6 to limit the resource consumption on the single server. However, the configuration of the memory was the deciding factor for the limitation to 6, since this setting is strongly dependent on the data. The microservice already provided the logic to create jobs for a synchronization, persist them into the database and execute them asynchronously.

The Migration to Kubernetes

How we did the migration

One major goal for the engineering team was to keep as much of the existing code and project structure untouched as possible because the integration is complex and matured over multiple months and years. We identified in an early stage just running the "old" docker container inside a Kubernetes pod will not be enough and make no sense for a company that is growing and needs scaling options.

In summary, the complete migration can be described in these steps:

The new target system consists of three different services and KEDA running in Kubernetes. The three services are built from one code base and merely started in different roles.

Here is a gist of the three roles:

The concept of workers and their lifecycle

As you can see above, the worker instances are responsible to process a synchronization run and as more workers are running as more jobs can be processed at the same time.
But there are still some questions we need to find a solution for:
a) How can we start and stop worker pods in relation to the number of queued jobs?
b) The procession time of a job is quite different and depends on the synchronization configuration and customer data. If a worker pod is stopped by Kubernetes during a job run, the whole job is failing. So, how can we prevent Kubernetes will not stop a worker? And how can we achieve that worker instances will not be running for too long and be updated when a new version is deployed?

The solution to that questions can be broken down into three parts:

Mostly KEDA is used to start new resources based on events. If we would stick to this pattern, for each new queued job a new worker service has to be started only responsible for a single job. But we don't follow this pattern.
The approach we did works differently: KEDA polls the database table desired_pod_count and ensures the defined number of resources (worker) are running. This guarantees that always enough workers are up and running. The worker itself pulls queued jobs and processes them!

One crucial aspect of our solution is the lifecycle of the worker pods, which is fully controlled by the worker itself. KEDA will only destroy worker pods if they are running for an unexpected long long time, which should normally never happen.
The end of a worker lifecycle depends on the uptime and the fact whether a job is currently being in process or not.

The worker count computation is realized inside the singleton service and done each 5 seconds. The calculation of the desired pod follows these rules:

At first glance, the calculation of the workers seems to be incomplete, since the QUEUED jobs are not considered. But because the desiredActiveWorkers take care that always one more "idle" worker is available, a QUEUED job will find its worker.

The WORKER_CAPACITY is one more option you can use to fine-tune the system based on the concrete use case. When set to 1 only one job will be processed per worker which leverages the highest encapsulation of processing. If it is set to 2, two jobs are running per worker which will reduce the number of worker pods and therefore the resources. The downside of a 2 capacity setup could be that an unexpected crash of one job (maybe due to a programming error in combination with input data) causes a failure of all jobs of the worker.

A Keda configuration for workers

Here is an example of the KEDA configuration we use to control the worker scaling:

activeDeadlineSeconds: 32400 -> KEDA's operator will terminate the pod after 9 hours
maxReplicaCount: 10 -> scales the target resource up to 10 workers
rolloutStrategy: gradual -> This setting controls KEDA to not stop a running worker pod after a new version of the worker service is deployed. This is important to avoid a crash of a running job.

Does KEDA work as expected?

After the system is deployed into the Kubernetes clusters, we want to verify that KEDA scales the worker pods as expected. The expectation for the current configuration is at least one worker on an idle job state and an upscaling up to 10 when jobs are piling up.

To verify that on Azure we use this Kusto query starting on KubePodInventory:

The time chart shows pretty clear that over the night only 1-2 worker pods are up and at 5am in the morning up to 10 workers are running. The reason for the 5am burst is because at this time a cron job creates for some customer integrations a synchronization job. Although the singleton instance "computes" at this time a higher worker request of 11 and writes that into desired_pod_count, KEDA limits the number of worker pods only up to 10 because of its configuration maxReplicaCount: 10. This configuration option makes it pretty easy to limit the resource usage on the cluster but also processes even a huge number of jobs over time.

I introduced how we moved from one single microservice that supports only a fixed number of parallel job processing to a dynamic solution running on Kubernetes. Although the new system is based on the legacy business code, we added just a new concept on top that realizes an asynchronous job processing controlled by KEDA.

The solution offers these advantages: 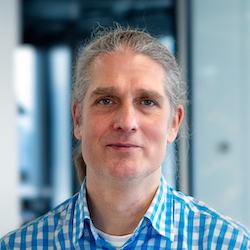